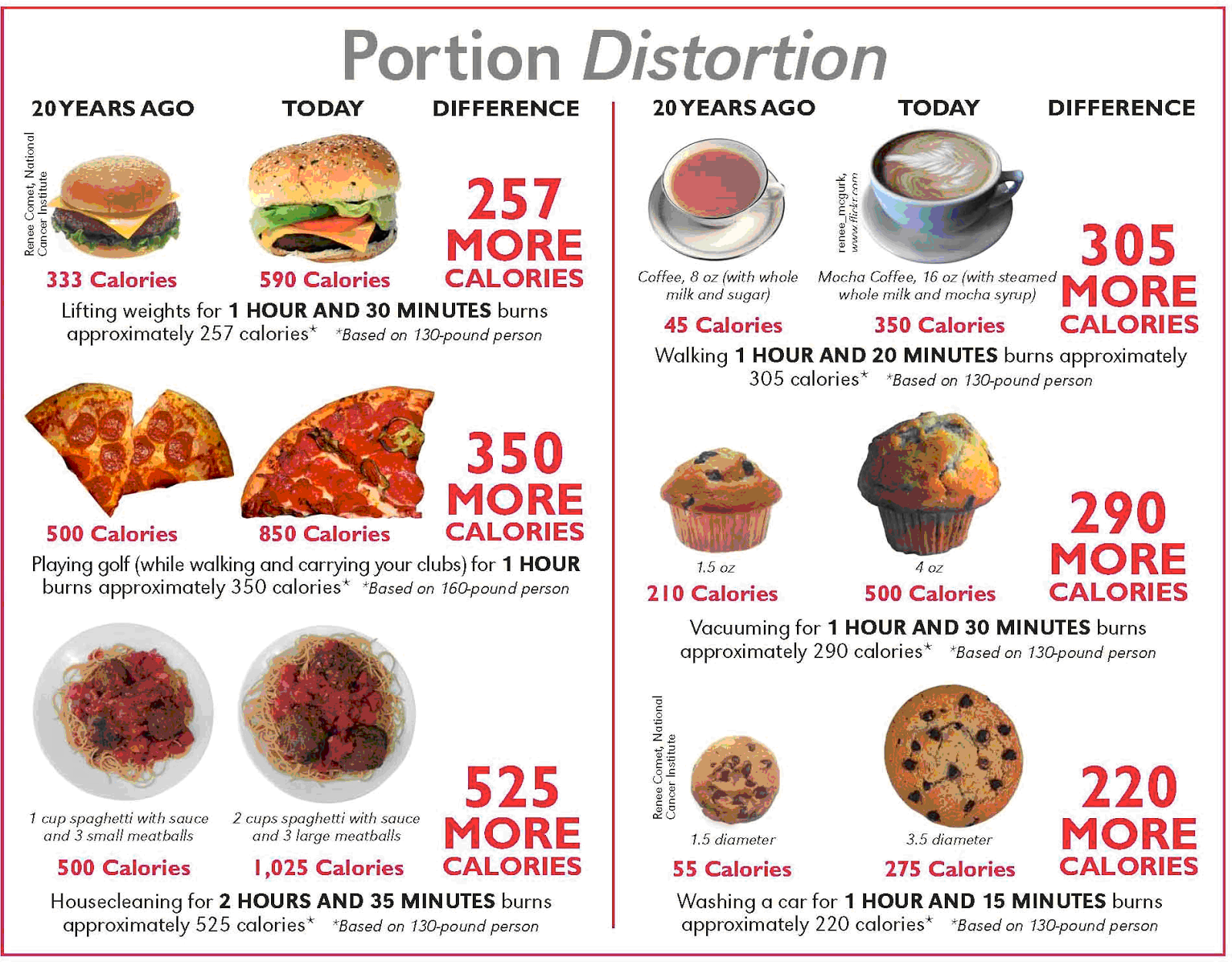 Food Portions: The #1 Factor That Makes You Fat
OCTOBER 29, 2013 by ADMIN in HEALTH NEWS with 2 COMMENTS

One phrase that has been neglected in the American food industry is “portion control.” The fast food industry has been very influential in this factor. Over the past decade there has been an increase in the sizes of the soft drinks, French fries, as well as the sandwiches at fast food restaurants. The popularity of “super-sized” food has spilled over into the marketing of other food such as potato chips, bottled soft drinks, and candy bars. These large portions also influence the way that food is portioned when meals are cooked at home.

When considering portion sizes, many people believe they are getting a better value for their money, but what they do not consider is the taxing effect that eating larger portions has on their bodies.

Ever notice how you feel after you eat a large meal, perhaps at a holiday celebration or on a day when you were feeling famished so you overate?

Well, with the huge portions found at fast food restaurants and often on the dinner plates at people’s homes, this feeling is probably occurring regularly. The physical discomfort felt is a sign that the body and organs are distressed. The liver cannot work efficiently when there is too much food to digest and therefore some of the food is not properly digested when it enters the intestines.

If the food is not digested properly and builds up in the digestive system it may lead to problems. Overeating over long periods of time may cause the body to be susceptible to diseases and decreases the functionality of the body’s natural digestive system. Not to mention the weight gain that is caused from eating huge portions of food during meals and snacks.

On average, the size of the meals found at fast food restaurants is four times larger than it was in the 1950s. The sizes today are at least double of what they were twenty years ago. Five cups of popcorn at the movie theater used to be considered large but that has increased to eleven cups in the large portion today. One bagel today is three times the size of what a bagel was twenty years ago.

“American size” is the name that the Japanese have given to the extra-large portions that are most commonly seen in America. The portion size of food in America is generally double the size of the same food in other countries. For example, a quesadilla in Mexico is traditionally made with a 5-inch tortilla, but in America the tortillas are typically 10-inches. The amount of chicken and cheese in the quesadilla is also doubled.

The other countries around the world may eventually follow suit with their portion sizes, at least to a certain extent. People in other countries tend to see America as the trendsetter nation and what is available in America often becomes popular in other places. Yet, these other countries also seem to understand that these portions are unhealthy and perhaps they will continue eating the traditional smaller portions.

Many countries also appreciate the value of food and do not want to be wasteful by overeating and therefore the portions are consistently smaller. An exception is when people of other countries move to America. Studies have shown that foreign people moving to America gain a significant amount of weight within very small periods of time after they move to the USA.

One of the reasons people buy larger portions is the perceived value of the smaller amount of money spent on the larger amount of food. Yet, there is a problem with this logic. Since the digestive system of humans is not made to function with these large portions, it will malfunction if forced to eat like this over a long period of time.

Therefore, there will be a necessary increase of the amount of money spent on medical issues and healthcare that could have been prevented through not overeating. This faulty logic needs to be considered when fast food companies advertise “two-for-one” or “fifty percent extra” for hamburgers and sodas.

Unfortunately, when it comes to large portions for smaller prices, it’s typically junk food and not healthy food. This also gives the perception that there is a greater value in purchasing unhealthy food in larger amounts, which is false once again. If the money spent on unhealthy food was spent on organic fruits and vegetables, there would potentially be a large decrease in the obesity epidemic and people would have healthier bodies overall.
What can you do?

There are many ways that eating smaller, healthier portions can be maintained. One way of doing this is to order an appetizer instead of a large meal at a restaurant. Or split a meal with another person instead of eating the whole portion. These are simple changes that can make a huge difference in the amount of food eaten during one meal. Another great way to decrease the amount of food you eat is to cook for yourself. You have control over the amount you put on your plate and you can also cook less so that you are not tempted to overeat.

If you cook smaller portions and begin to eat less food, over time you will start to save money which you can use to purchase healthier food. It is also possible to find two-for-one deals on healthy foods. Yet, it may require effort to find these deals as they are not as prevalent as the same deal on junk food. Buying healthy food in bulk is often easy to do online and knowing that you have healthy food at home may decrease the temptation of eating huge portions of food at restaurants.

With the popularity of fast food in America and the steady increase of portion sizes, it is difficult to maintain a healthy diet. Yet, the benefit of doing so far outweighs the difficulty of the challenge. Eating smaller portions and eating healthier food gives people a more vital life and does not cause weight gain. Therefore, it is important to continue to strive for these healthy goals and eating habits even in the face of so much temptation.

Emma Deangela is the best selling author of The Alkaline Diet Program and 80/20 Fat Loss. She has helped over tens of thousands of men and women to lose weight and transform their health with sound nutrition advice.

Which wonderful friends in your life would appreciate this information about food portion? Are they consciously eating bigger portion than what they should eat?

Please help them by sharing this eye-opening article with each of them using any of the social media and email buttons below.

If you have been to countries out of US and notice about their food portion, do share it with everyone by writing your experience in the comments below. Other readers will appreciate your share tremendously!

Original link
Posted by Salud with RainOnTheLand at 10:42 AM