The Environmental Working Group: How to read a label. Know the ingredients in your personal care products

Most people use around 10 personal care products every day, with an average of 126 different ingredients. We'd like to believe that the government is policing the safety of all of the concoctions we put on our bodies, but it's not. Instead, these unregulated products pose uncertain dangers for our health and our environment.
EWG thinks you deserve better. We asked our research team to put together some tips on how to choose better body care products. You'll learn how to:

Know the ingredients in your personal care products

Better products are truthful in their marketing claims and free of potentially worrisome ingredients. Some products might make claims like "gentle" or "natural," but since the government does not require safety testing, personal care product manufacturers can use almost any chemical they want, regardless of risks.
How to read a label
Every personal care product must list its ingredients. Here's how to navigate the label:
For grown-ups
Many parents pay more attention to their kids' environmental health than their own, but adult bodies can be affected by toxic chemicals, too. EWG's Safer Shopping List has nine common-sense tips to reduce everyone's exposures. For instance, buy fragrance-free, skip the nail polish and use fewer products.
Just for kids
Extra caution is in order for kids because, pound for pound, they are exposed to more contaminants in everyday products than adults. Their immature metabolism and organ systems are typically less capable of fending off chemical assaults. Even subtle damage to young bodies can lead to disease later in life.
Follow EWG's top five tips for kids:

Posted by Salud with RainOnTheLand at 4:54 PM

Posted by Salud with RainOnTheLand at 10:00 AM 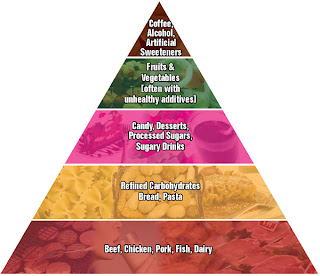 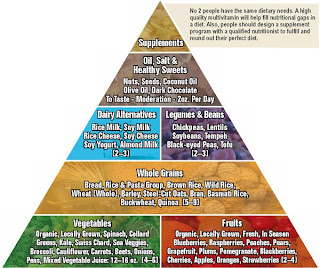 I like this food pyramid. I am not vegetarian but I believe this is the best pyramid for our health. I add my fish and other animal proteins between the dairy and the legumes.
VS the bad one:
http://www.garynull.com/food-pyramid
Posted by Salud with RainOnTheLand at 9:40 AM

10 Things Monsanto Does Not Want You to Know

Genetic engineering is a radical technology that breaks down genetic barriers between humans, plants and animals. Once released, these genetically modified organisms (GMOs) can easily spread and interbreed with other organisms, and they are virtually impossible to recall back to the laboratory.

Monsanto provides roughly 90% of GMO seeds in the world. These seeds have been genetically modified to produce their own pesticide or survive repeated spraying of their toxic herbicide Roundup. Monsanto's GMOs are not designed to increase yields to feed the world, but rather to increase Monsanto's profits by increasing the use of chemicals such as Roundup and selling their high-priced patented seeds which farmers must buy every year.

Due to the enormous political clout of Monsanto, the American public is being denied the right to know whether their foods are genetically engineered or not. Following is a list of 10 facts about Monsanto and GMOs, and how they can adversely affect your health, local farmers, and the planet.

http://www.fearoftheinvisible.com/introduction-to-the-book#
We have been taught to greatly fear viruses - and yet scientists have long known that these are fundamental parts of life, made by the millions by all healthy cells.  I hope this book will help by combating this fear, this damning of the invisible because we do not understand it. Without this fear, hopefully the focus in medical research will shift to the environmental toxins that really do put us, and our world, gravely at risk.
As for myself, my work as an investigative journalist previously was on relatively safer subjects for one's reputation in the liberal press, such as arms for Iran, Aboriginal land rights, blood diamonds. I do not expect such a relatively easy ride this time, given the emotion connected to this issue. Indeed, attempts have already been made to prevent this work appearing, by the same academics who have tried to prevent publicity for the works of the ‘dissident' scientists, I suppose I should be honoured to be seen so early as a danger by them, even before this book appeared! You can read here verbatim their attacks on my work and judge their validity for yourselves.
But the truth needs to be out.  I hope my account will help to lift the fear with which these natural and fascinating tiny particles have been enshrouded for far too long. They are the products of our cells - and they helped make us.
When I began some twelve years ago my journey into medical research, it took me into the grim world of the virus hunters - but then, utterly unexpectedly, it led to me being utterly enthralled by the marvels of miniscule world of the cell and of its messenger particles or viruses, a world that may well extend across galaxies. I invite you to join me on this journey to meet with our oldest, smallest ancestors, ones whom we are only just now starting to know.
Posted by Salud with RainOnTheLand at 8:45 AM

I am going to spend extra time on this topic. It is on my heart to find more about the long-term consequences of the vaccines and I hope many will look into this for the safety of our children.


The word ‘virus' comes from the Latin for a poisonous liquid, and before that from the Sanskrit for the same. The hunt for them started when, towards the end of the 19th century, it was suggested that invisible living particles much smaller than bacteria might cause the epidemic illnesses for which no bacterial cause could be found. When the electron microscope found tiny particles in the blood serum of patients entering and leaving human cells, this was a Eureka Moment.  The prediction was surely about to be proved true.  These particles were assumed to be invading and hijacking our cells in order to reproduce. They were thus all condemned as poisons, as ‘viruses.'
As more of these were searched for and found in sick people, many illnesses became blamed on them.  They became the invisible enemy, the nano-terrorist we must fear. We were instructed that one of our first duties for our newborn children is to vaccinate them against this dreaded foe.  Thus was created an ever-growing multibillion-dollar pharmaceutical industry.
But, as I have travelled through the science that underlies this industry, I have gradually learnt to ask questions. I now realise that there is another way to see this story that fits all the data. I have learnt from biologists that our cells naturally produce viral-like particles without being invaded or infected, both when healthy and sick. Currently such particles are named by asking what illnesses they cause as if this is their raison d'être, their only importance, the sole reason for cells making them. They would be named far more positively and comprehensively by asking what cells produce them and for what purpose.
Scientists like Barbara McClintock, who won a Nobel Prize for finding that cells operate with intelligence and seek to repair themselves, have given us a very different understanding of the particles they make. We now know that our cells create multitudes of tiny transport particles (vesicles) to carry the proteins and genetic codes needed within and between cells. The ones that travel between cells, those our cells use to communicate with each other - are puzzlingly just like those that we have long blamed for illnesses.
It now seems that we may have broadly misconceived the virus; that they may be simply inert messages in envelopes carried from cell to cell.  In the last ten years scientists have begun to call them instead ‘exosomes', ‘particles that leave the body' of the cell, thus removing the inference that they are all poisons.  Distinguishing the healthy particle from the pathogenic is now an enormous problem for the virologist, for it has been discovered that our cells make them all in the same way, in the very same place.  It also seems we cannot stop this process without risking severely damaging our cells.
So, perhaps we need to halt the juggernaut of virology with its virus hunt, and look to see if there is another way of helping us keep healthy. We need to know how we can strengthen the malnourished cell, rather than use the many medicines that try to prevent it from making particles by interfering with its essential processes. We need to know if a poisoned cell may produce unhealthy messengers or viruses.  We need to learn far more about cells - for only now are we starting to understand how they communicate and the very important role played in this by the particles we had totally demonised as viruses.

More visit the link and don't miss this...

As for childhood vaccinations, surely they have proved a great benefit?  I long thought so, but I have found the government scientists we entrust with our children's lives have admitted, at official vaccine safety meetings reported here for the first time, that they cannot clean these vaccines; that they allowed their use despite knowing that they are scandalously polluted with numerous viruses, viral and genetic code fragments, possibly toxins, prions and oncogenes. The World Health Organisation has also disclosed at these meetings that it has long known that the MMR vaccine to be contaminated with avian leucosis virus. This is a bird virus linked to leukaemia, but the public have not been told about this.  Why most children are not falling ill from this dangerous contamination is, it seems, because most are thankfully gifted by nature with very effective immune systems - and because these viruses are generally not as dangerous as these scientists believe.
Posted by Salud with RainOnTheLand at 7:35 AM

Feeding your skin from within


The body’s largest organ of elimination is the skin, your skin flushes out wastes and toxins through its pores. When you build up more than your skin, kidneys and liver (also cleansing and filtering organs) can handle, lump and bumps, welts, blemishes and pimples result.
No intensive blemish-clearing wrinkle erasing “recipe” can be absorbed through clogged, constipated skin. Skin must be clean not only for the outside in, but from the inside out as well.
Toxin and sludge makers include those infamous refined sugars and refined carbohydrates, fried food, indigestible animal fats, alcohol and caffeine. Go easy on the French fries and potato chips, milled grains and flour, full fatted ice creams, cookies, cakes and candies. Red flag chocolates, colas, coffee and other caffeine containers. Over a period of time, improper diet, particularly one lacking in protein (sometimes the result of a fad dieting) and deficient in vitamins A, C and E, zinc and silicon leads to collagen breakdown, and premature sagging and wrinkling.
Your skin directly reflects your entire physical condition. Nibbling clean, means nibbling on the right foods.  A magnetic glowing complexion is the direct result of a clean, sludge-free and healthy inner you.
Munch on those vitamins and minerals rich fresh fruits and veggies. Be sure to balance in sufficient protein—your skin’s collagen and elastin are proteins, and all your body will begin to deplete the protein in your skin and muscle. Don’t forget whole grains and complex carbohydrates. Many over-oily, over dry or problematic conditions clear rapidly with a change diet.
Be sure to include your 6-8 ounces glasses of water a day along with your fresh raw fruit and vegetable juices along with whichever proteins work best for you.
Posted by Salud with RainOnTheLand at 3:39 PM