Average woman applies 500 chemicals a day to her body 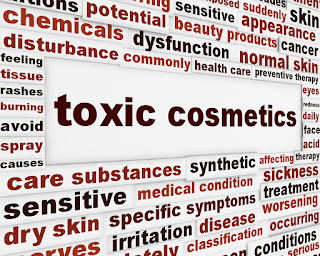 YOU wouldn't want to eat food that contains high levels of toxic chemicals, but do you know what you're putting on your skin?

As you slap on body moisturiser or reapply a fresh coating of lipstick, you could be subjecting your body to a cocktail of less than beneficial chemicals.

That's the finding of a study by natural deodorant company Bionsen in the UK, which claims that the average woman applies more than 500 chemicals to her body every day during her beauty routine.

And new research by the University of California, Berkeley, found that lipsticks can contain as many as nine different metals. If used twice a day, they provided more than 20 per cent of a person's acceptable daily intake (ADI) for aluminium, cadmium and manganese. Some exceeded the ADI for chromium, a metal that has been linked to stomach tumours.

If applied frequently, several of the products would push those figures over the ADI for aluminium and manganese.

"Finding these metals isn't the issue; it's the levels that matter," Berkeley researcher Katharine Hammond says. "Some of these toxic metals are occurring at levels that could have an effect on long-term health."

Over-exposure to some chemicals has been linked to toxicity in the nervous system and cancer, but such studies aren't new. For years we've been warned of the possible side-effects of parabens (synthetic preservatives in everything from toothpaste to shampoo) and sodium lauryl sulfate (which creates foam). What's changed is the way companies label products.

"But a list of [ingredients it doesn't contain] doesn't mean a product is free of synthetic chemicals. It's just free of the ones that are recognised by consumers, while still containing others masked under statements such as 'derived from corn starch'."

The Australian Society of Cosmetic Chemists (ASCC) backs this up, saying: "There are no Australian standards defining natural cosmetics."

HOW SAFE ARE PARABENS?

Parabens are one of those recognised ingredients. It was believed they were safe because they couldn't be absorbed by the body, until a study from the University of Reading in the UK tested human breast tumours and found that nearly every one contained traces of parabens.

It's now known that parabens mimic the hormone estrogen, which raises concerns over a link to breast cancer and fertility issues.

The ASCC says "parabens may have weak estrogenic activity," but it also says this activity is "short-lived".

Like parabens, they were seen as harmless. The ASCC says of nanoparticles: "The balance of scientific evidence is that there's no reason for concern for users of personal care and cosmetic products."

But a recent study by Stony Brook University in New York found that gold nanoparticles accumulated in stem cells and could accelerate ageing and wrinkling, slow healing and lead to the onset of diabetes.

It's this cumulative effect that has people worried.

"Lots of the hi-tech, new generation cosmetics and beauty 'wonder' treatments contain more chemicals to be able to achieve better results, which means women carry more chemicals than ever."

Campaign for Safe Cosmetics : Average woman applies 500 chemicals a day to her body

Posted by Salud with RainOnTheLand at 2:00 PM